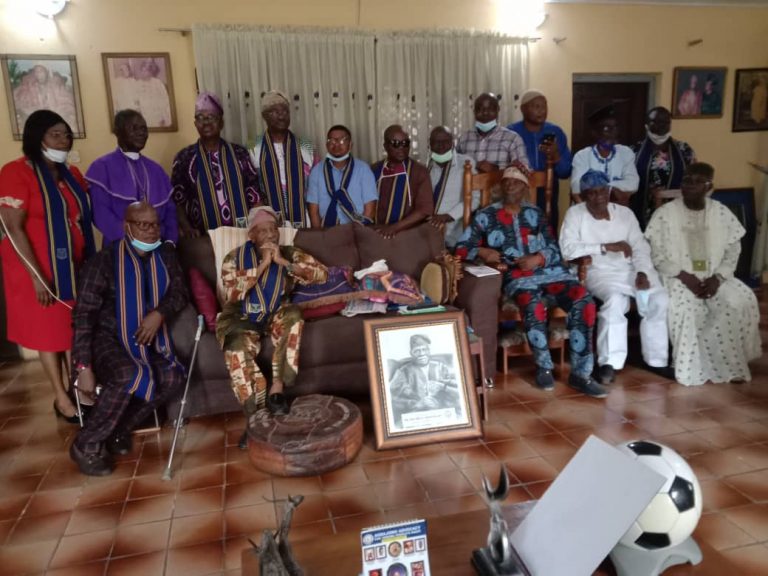 The University Of Ibadan Alumni Association (Ondo State Branch) has celebrated and honoured the Emeritus National Leader of Afenifere, Pa Reuben Fasoranti on the occasion of his 95th Birthday.

During the visit on Monday, this week, One of the Afenifere leaders in Ondo state, Chief Korede Duyile welcomed the Alumni to Chief Reuben Fasoranti’s home and recounted some of his profile.

According to him, Baba Fasoranti who is now 95yrs graduated from the prestigious University of Ibadan in 1952.

Duyile said “he was a foremost educationist in Nigeria, founder and principal of schools. He founded the Akure High School, Omolere Nur/Pry School as well as principal of Iju-Itaogboku, Oyemekun Grammar School, Akure and Christ School, Ado Ekiti.

“He was a democrat to the core, a disciple of Chief Obafemi Awolowo, right hand man of Chief Adekunle Ajasin and a former commissioner for finance in the old Ondo state.

The Chairman of the Alumni, Barrister Bola Kayode revealed the purpose of the visit which was to celebrate Baba whom he described as one of the ‘who is who’ as far as University of Ibadan is concerned.

He equally informed that Baba Fasoranti will always be consulted when planning for the associations programs.

Kayode prayed Baba will live more years in good health and also appreciated Bashorun Sehinde Arogbofa for piloting the affairs of the group and providing quality leadership for many years.

He later invited Chief Isijola who spoke on his forthcoming book launch titled ”Heroes and Icons of Ondo State” which coincidentally featured Pa. Fasoranti as both a Hero and an Icon.

Chief Femi Aluko who has been a member of Baba’s kitchen cabinet for many decades revealed that the event was one of his happiest day.

Aluko recounted how he has been groomed to become a better UIte and a fulfilled person by Pa Fasoranti.

He appraised Chief Isijola for going into the archives to publish his book.

Aluko equally commended Bashorun Sehinde Arogbofa whom he classified as the backbone of Pa Fasoranti cabinet for his leadership role for the Alumni Association.

The former Ondo Commissioner for Education commended the Association’s Chairman who was his ex-student and finally encouraged the members to always cone around to share time with Baba Fasoranti.

In his comment, Bashorun Sehinde Arogbofa applauded Pa. Reuben Fasoranti whom he called a rare leader who had made immense contributions to the development of Nigeria, and whose indelible records cannot be quantified.

He urged members of the association to always read Baba’s books; while also urging them to graciously attend Chief Isijola’s upcoming book launch.

Responding, Pa. Reuben Fasoranti expressed his joy and surprise over the visit which he described as a memorable one.

He appreciated the graduates of University of Ibadan for their good conducts and encouraged them to continue upholding the good name of the institution.

Pa Fasoranti further appealed to the women to show more commitment in the activities of the association.

The highlight of the visit was the presentation of a special portrait to Pa Fasoranti by the association.