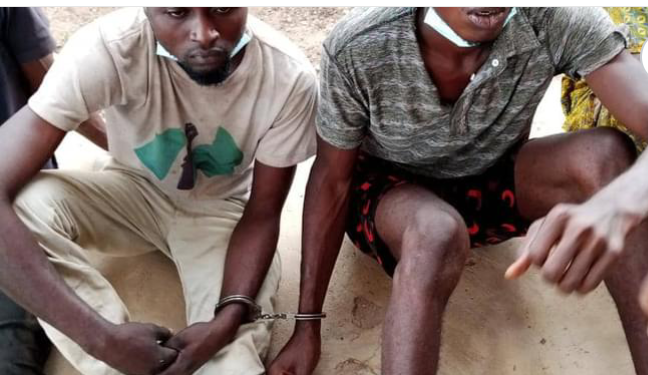 The Ondo state Police Command has arrested four man gang who allegedly apprehended a three man gang for allegedly breaking and stealing of goods worth over half a million naira at a location at Alagbaka Akure,the Ondo state capital.

Some of the looted items including Fourteen (14) Spaghetti and female sandals.

Confirming their arrest to SUNSHINETRUTH, the Commissioner of Police in the state, Mr Bolaji Salami said his men recovered some items from the suspects and they had confessed to the crime.

Salami said, “SHOP BREAKING AND STEALING: On the 8th  and 25th  of July, 2021, at night time, a gang of Robbers broke into the shops of Mrs. Olorunfemi Titilayo and Mrs Odunayo Momoh located at Alagbaka area of Akure and carted away goods worth Five Hundred and Twenty Two Thousand Six Hundred Naira Only (₦522, 600.00) to an unknown destination.

“The robbers gained access into the two shops through the ceiling, as soon as the case was incidented; a team of Detectives swung into action and arrested the following suspects: a) *Isreal Ramnap ‘m’ 21years*
b) *Partem Small ‘m’ 24years*
c) *Destiny Emmanuel ‘m’ 25years.*

“The following exhibits were recovered from their houses which had been identified by the complainants as part of their stolen goods.
a) Seven (7) different types of Caro white body cream
b) Four (4) pairs of female sandals.
c) One Colgate and one pepsodent tooth paste.

In an interview with SUNSHINETRUTH, the suspects who confessed to the crime, said they were hungry and suffering forced them into the unholy act.

The police boss said they will be charged to court soonest.