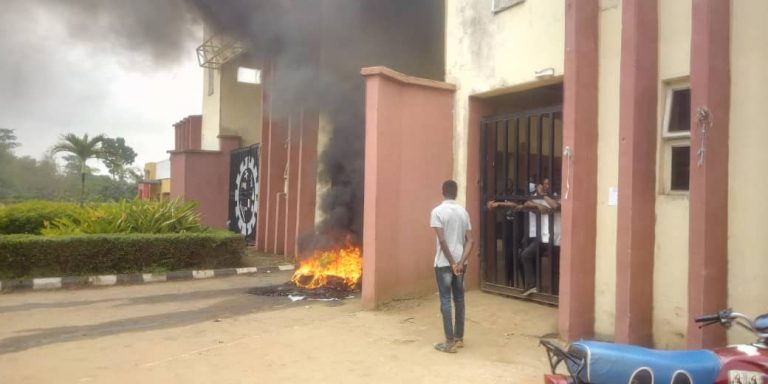 Turmoil at FUTA over Student’s death

There was a mayhem at the Federal University of Technology, Akure, FUTA yesterday as students blocked major Ilesa-Akure Highway and shut the schoolgate following the death of a 200 level Software Engineering student, Daniel Adeyinka .

SUNSHINETRUTH understands the protesting students who blamed the school authorities for the death shut one of the school’s main gates on Akure – Ilesa expressway, barricaded the expressway and alao made bonfire resulting in traffic gridlock on the road.

The National President, National Association of Ondo State Students, NAOSS, Ayoade Kikiowo who is also a FUTA student, insisted that the student died due to the alleged negligence on the part of authorities.

He alleged that his life could have been saved if security guards opened the gate on time for the victim to be rushed to the health center for emergency attention.

Speaking on this, the school’s authorities in a statement by the Registrar, Mr Richard Arifalo expresses sadness over the incident but absolves itself of any complicity.

Below is the full text of the school’s statement;

PRESS STATEMENT ON THE DEATH OF ADEYINKA DANIEL, 200 LEVEL STUDENT OF FEDERAL UNIVERSITY OF TECHNOLOGY AKURE

“The Management of the Federal University of Technology Akure, FUTA expresses deep sadness at the demise of one of its students, Adeyinka Daniel, 200 level, Software Engineering, in the early hours of August 3, 2021 following an automobile incident along Oyemekun Road Akure. We commiserate and identify with family , friends and fellow students of the deceased on this very painful loss of a promising student.

The university is particularly saddened by the circumstances leading to his death.

From available information the deceased student along with others were involved in an accident outside the campus around 10 PM on August 2, 2021. They were first taken to a private hospital were doctors battled to save their lives.

Three of the students were stabilized but Daniel’s condition remained critical. When the condition of the student deteriorated the doctor at the Private Hospital referred him to the Federal Medical Centre, Owo for expert intervention.

At that time the parents of the student and some relations had joined him at the Private Hospital and it was decided, because of time factor, to bring him to the University Health Centre. The deceased student was brought to the University Health Centre at 3.20 AM and the doctor on duty promptly attended to the student in the car of the parents. According to him, all resuscitative efforts proved abortive; there was no cardiac activity and response to any stimuli. And by 3.40 AM he declared that he was brought in clinically dead.

The doctor offered to take the boy to the morgue with the University Ambulance but the parents declined electing to take him home ostensibly for burial.

The Medical report from the Private Hospital which was brought along with him indicates that the student was clinically non responsive by 1.30 AM well before they got to the University Health Centre at 3.20 AM.

The death is unfortunate and regrettable.

The University has ordered an immediate review of the incident in order to ascertain the circumstances leading to it.

Our thoughts and prayers are with the family of the deceased student. The University is also monitoring the state of treatment of the other students who were also involved.

We pray that the Almighty God will grant the family and friends of the deceased the fortitude to bear the irreparable loss.”