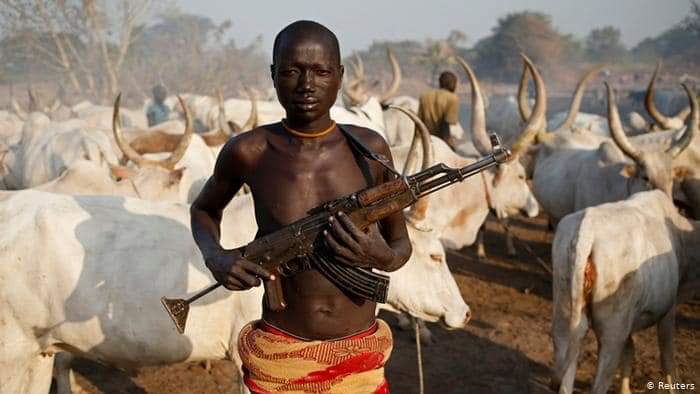 Men of the Ondo State Security Network Agency codenamed Amotekun Corps have arrested  continued to apprehended herders and their cows for violating the Anti-open grazing Law in the state, even as the Corps has apprehended another set of herders over same offence in Akure North Local Government Area of the state.

The latest suspects, Abdullahi Sanni and his uncle, identified as Baba were apprehended by men of the Corps after they grazed on some farms at Iju town in Akure North Local Government Area of the state.

SUNSHINETRUTH learnt that two herders who were arrested at Iju now risk three years imprisonment or payment of a minimum of one hundred thousand naira (N100, 000) fine to the farm owners according to the anti-open grazing law.

It was gathered that open grazing of cattle and cows has become an avenue where herders and farmers frequently engaged in dangerous clashes over destruction of farmlands and crops which accounted largely for the scarcity and high cost of food items as farmers have abandoned their farms for fear of being killed.

The worrisome development compelled the Ondo State Government to come up with the Anti-open grazing Law to sanction the nefarious activities of the killer herdsmen in the state.

Confirming the arrest, the state Corps Commander, Chief Adetunji Adeleye lamented that despite the state government signing the Anti-open grazing law, the herders still continued in their old ways.

His words, “You are aware that the Anti-open grazing. Law is fully in place and some of you are still running foul of this law.

“We have a number of farmers and herders here with us and we are making them comply with the enacted law which stipulates penalty for defaulting herders.

“The position of the law is that, if they choose to go to court, we would implement the law as it was stated, which stipulates the minimum of one hundred thousand naira (N100, 000) fine or three years imprisonment.
“In most cases, you would see them pleading that such a thing would not happen again.

“We have also implored them to educate other members of the Miyetti Allah, that Anti-open grazing Law of Ondo State is fully in place,” he said.

The Amotekun boss further explained that the state government would take a stronger step in sanctioning second time violators after checking records.
“When it is done the second time, the person would go to court to receive the full weight of the Law.

“I want to implore the herders to abide by this law and should endeavour to move their cattle and cows with the use of trucks.

“This is because most of the time, they operate under the guise that they are moving from one settlement to another. The provisions of the law says that they should move them in truck.

“It is still the reinforcement of the Anti- Open grazing Law of cattle and cows in the state. It is in full force and the Ondo State Security Network Agency is resolute about enforcing the law,” he said.

However, the suspects said to be first time violators have been made to settle the farm owners out of court while they paid a specified amount into government purse.

The suspects said they have been living in Iju Community peacefully, and that they do not want trouble with any one adding that they are ready to pay any amount of compensation for damages.

“We have been co-existing peacefully in this community and we don’t want any trouble with the state government. They have shown us love by accepting us and we are ready to settle out of court and pay any specified amount for damages done the farmlands,”they said.

Applauding the state government’s gesture which he said will bring succour to the farmers and people of the state, a farmer, Mr Lanre Tioluwanise from Iju Community in Akure North Local Government areas of the state, expressed happiness, saying the move is a welcome development.

“I am glad because the herders have agreed to pay the specified amount to me for the destruction of my farmland and I know this will serve as a deterrent to others,” he said