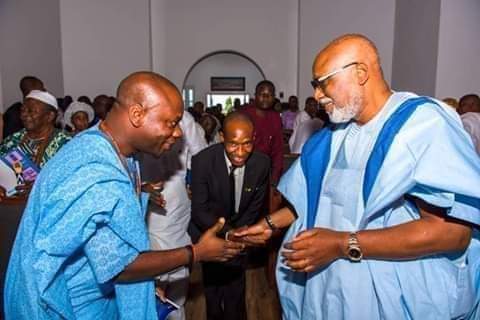 The convener of IBI GIGA AMBASSADORS CHIEF Alex Ajipe has congratulated Mrs Oladunni Odu on her appointment as the Secretary to the State Government.

He also congratulated the trio of Mr. Dare Aragbaiye, Hon. Babatunde Gabriel Kolawole and Mrs Olubunmi Adedipe Ademosu who were on Wednesday appointed by Governor Rotimi Akeredolu as Special Advisers.

Chief Ajipe in a statement signed by his media aide, Solomon Adewoye and a copy made available to SUNSHINETRUTH in Akure described the new appointees as some of Ondo finest in terms of their educational and professional pursuits which covers wide range of knowledge in all areas of human endeavour.

According to him, he has had the rare privilege of working with some of the appointees in a number of official capacities and he could attest to their capability to deliver and move the State to the desired next level with Governor Akeredolu

“Your appointment has further demonstrated that there is always a reward for hard work and loyalty. Mrs Oladuni Odu is highly experienced and a seasoned administrator.

“She is eminently qualified to hold this noble position of Secretary to the State Government having served in various capacities as commissioner in the state and also at federal level”.

“I can also testify to the good work of Mr Dare Aragbaye who is the immediate past Head of Service in the state. Your credibility, success and hard work as head of services earned you this appointment again by Mr Talk and Do governor”.

“I equally congratulates my friend and brother, Hon. Babatunde Kolawole, a former member of Federal House of Representative. Your reappointment as Special Adviser shows your commitment, loyalty and competence. I am convinced that you will continue to work with Mr governor for the development of our dear state”. He said.

He however appealed to the new appointees to justify the confidence reposed in them by performing far beyond Ondo people expectations in their various capacities.

“You have been considered for your respective positions on merit, but you must note that the skills and competencies that qualify you for these jobs will need to be constantly improved upon to ensure adequate service delivery,” Ajipe stated.