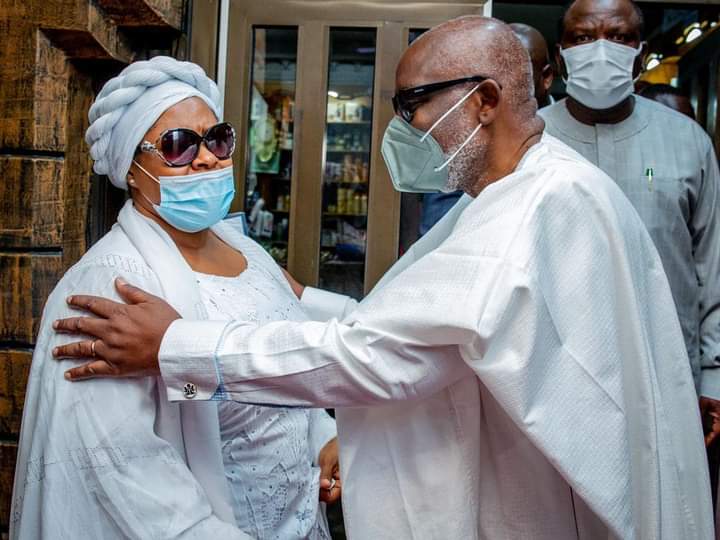 What T.B. Joshua did for me —Akeredolu, as Ooni, Sanwo-Olu pay last respect

Tributes and testimonies poured in on Friday as the remains of the founder of the Synagogue Church Of All Nations, SCOAN, Prophet Temitope Balogun Joshua, popularly called T.B was laid to rest.

Dignitaries from all walks of life testified about his works, life, and impact to humanity especially the less privileged.

Governor Babajide Sanwo-Olu of Lagos State, in his tribute, titled: ‘Celebration of life and legacy of Prophet Temitope Joshua’ described the late Joshua as an intentional man of God that fulfilled destiny.

Sanwo-Olu, who was represented by the Commissioner for Home Affairs, Prince Olanrewaju Elegushi said the late televangelist was an ‘uncommon minister’ who impacted people within and outside the shores of Nigeria positively. Sanwo-Olu added that the pastoral, wise counsel, and philanthropic gestures of Joshua will be sorely missed by all.

In his words: “There is a time to be born and there is time to die. Prophet T.B Joshua ran a purposeful race, he chooses to focus on his pastoral race, his demise on June 5, will forever be remembered. We should however celebrate this Apostle his life is indeed worthy of emulation”.

He lived with the common man and became a renowned preacher. He came from a humble background and he still served as a father to the fatherless, widows, and the less privileged.

”I urge all Christians to emulate TB Joshua’s life. We must be determined to make Nigeria a pride among other countries. I commensurate with Mrs. Evelyn Joshua, the children, and the Church. He would be greatly missed”.

Also, the Ooni of Ife, Oba Adeyeye Ogunwusi, Ojaja II, in his tribute said as a televangelist, late T.B Joshua did not just win souls for Christ, he was passionate about changing lives.

Represented by his wife, Olori Naomi Enitan, he urged the family to take solace in his good adding that the late cleric is now Heaven’s gain.

THE WORLD HAS LOST A GIANT ― Akeredolu

Governor Rotimi Akeredolu of Ondo State, on Friday, paid glowing tributes to the founder of the Synagogue Church Of All Nations, SCOAN, Prophet Temitope Joshua saying the world has lost a giant.

Akeredolu, who spoke during the burial of TB Joshua said Joshua’s death is a global knock as his ministry attracted immeasurable foreign followership.

The governor, in his over 20 minutes testimony at the event, said the renowned man of God was a blessing to humanity and a great Ambassador who left an unforgettable legacy.

He said: “Temitope Joshua is a loss to Christian faithful, to the adherent of other faiths. His humanitarian work touched several lives. He left an unforgettable legacy. He has engraved himself in the heart of people all over the world and we will not forget our brother in a hurry.”

”Prophet Temitope Balogun Joshua, the people of Ondo State, Nigeria and indeed the entire world has lost a rare gem, a true son of Ondo state.

His passing is indeed a great loss not only to his home town Arigidi but to the entire humanity. A very humble man, you need to visit his place Arigidi, no wonder this is a world congregation, I am not too sure we have had this great in a service like this, the world is more represented here than when Nelson Mandela was buried.

“He was a special child from what I heard from his peers, maybe he didn’t know he was special because he performed miracles in primary school. He was one who would tell his peers don’t go and play, if you go, you will break your leg, and if you proceed, you will come back with a broken leg, he had a special gift.

”His love was not only for the less privileged, but it was also for the privileged. I can testify personally, the things I benefitted from him, when I won election as governor of Ondo State, he drove all the way from Lagos to Owo to congratulate me, he prayed for me and put something in my pocket, he said as my governor, you will need to entertain people.

”What we benefited from him, in Ondo State, in terms of education, he paid the electricity of four local governments in Ondo state, a number of them did not have a transformer, he bought and ensured that they were connected to the national grid.

”The SCOAN is probably the most tourist site in Nigeria because people come here from all over the world.

On the Governor’s entourage were the Deputy Governor, Hon. Lucky Aiyedatiwa; Speaker of the House of Assembly, Rt. Hon. Bamidele Oleyelogun; Chief of Staff, Chief Olugbenga Ale; and other members of the State Executive Council.

Governor Akeredolu described the farewell service as a world congregation, adding that it attested to the late Prophet’s acceptability across the world.

In his tribute to the late cleric, the Governor said the people of Ondo State, Nigeria and the entire world have lost a rare gem and a special breed, who was a worthy citizen and true son of Ondo State.

He said the late Prophet has engraved his name in the hearts of the people of the world.

“The passing of Prophet T. B. Joshua is indeed a great loss not only to the people of Ondo State and his home town, Arigidi-Akoko, but to humanity.

“The indelible imprints and impacts of the late Prophet are visible not only in his home State, Ondo State, several parts of Nigeria but throughout the world.

Akeredolu said, “Pst TB Joshua when I won election in Ondo State, he drove to Owo and something went wrong with his vehicle but he managed to get to Owo.

“He told me I am the governor of his state and he has come to wish me well. When he was leaving he put something in my pocket. I won’t tell u how much but it was a great thing. He said as governor you will need to entertain people.

“Indeed, he was globally acknowledged. He contributed greatly to the uplifting of the downtrodden, emancipation of the widows and orphans all over the world.

“He touched their lives socially, economically and spiritually. We recall that the late world-renowned televangelist had a humble beginning, he wasn’t born with a silver spoon in his mouth.

“Perhaps that could be the reason for his affinity with the less privileged in our communities. We cannot but testify to the good things we benefitted from him as a State, in terms of scholarship awards to students, youths empowerment, resolving and settling huge electricity bills owed by some local governments and ensuring their reconnection to the national grid after many years of disconnection, giving logistical support to security agencies, amongst others,“ Governor Akeredolu said.

He described the late prophet as a firm believer in love, saying he preached love in most of his teachings.

The Governor said: “He was a man of peace who remained focus and undeterred in his mission on earth despite criticisms and misgivings by some people about him.

“His style portrayed originality, peculiarity, humility and simplicity. He was a gifted leader who was able to command large followership across the globe. He was a man who pulled himself up by his bootstraps to achieve stardom.”

While urging the people to take solace in the fact that the man of God lived a fulfilled life, the Governor prayed that God should give his widow, Evelyn Joshua, the children, the Synagogue Church of All Nations (SCOAN) and, of course, the Kabiyesi and people of Arigidi-Akoko the fortitude to bear the irreplaceable loss.