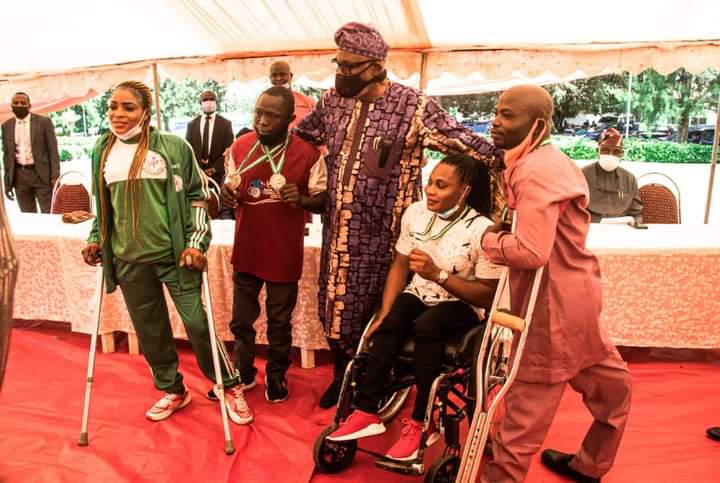 Why I held Special Thanksgiving with Disabled Persons, recruited 37 of them —Akeredolu

……. Directs Reconstitution of Board Of Agency For The Welfare Of Persons With Disabilities

Ondo State Governor, Arakunrin Oluwarotimi Akeredolu, SAN, has held a special Thanksgiving service with Special Persons in the state to celebrate the Supreme Court victory which affirmed the his re-election at the October 10, 2020 governorship election.

The Governor, alongside his deputy, Hon. Lucky Aiyedatiwa and their wives had hosted dignitaries across the country to a Thanksgiving and reception in Owo, last Sunday, to celebrate the Supreme Court verdict.

Governor Akeredolu said he decided to organize a special Thanksgiving service with the persons living with disabilities because of their importance and uniqueness in the society.

The event was attended by the Deputy Governor, Hon. Lucky Aiyedatiwa; Minister of State for Niger Delta Affairs, Sen. Tayo Alasoadura; members of the State House of Assembly, led by the Speaker, Rt. Hon. Bamidele Oleyelogun and accompanied by the Majority leader, Hon. Oluwole Ogunmolasuyi and others; Acting Chairman of the All Progressives Congress in the state, Engr. Ade Adetimehin, members of the State executive Council led by the Secretary to the state Government, Princess Oladunni Odu; and the Patron of the Persons Living With Disabilities, Dr Tunji Abayomi.

Speaking at the Special Thanksgiving held at the Government House Ground, Alagbaka, Akure on Saturday, Arakunrin Akeredolu reiterated his commitment to the welfare of special persons in the state while thanking them for their support .

“Why I invited you is to celebrate together and praise God for what he has done. I thank God. I didn’t see you on Sunday at our Thanksgiving service in Owo and I said we must invite you specially and hold this Thanksgiving.

“Although we invited you, I thank you for the presentation. I appreciate the plague. I want to thank your members who have done this state proud, and extension, this country.”

The various group of the Special persons include; Physically Impaired, Visually Impaired, Hearing / Speech Impaired and the Abinos.

Earlier, the Chairman of the Joint National Association of Persons Living With Disabilities in the state, Ewa Emmanuel, thanked the Governor for the inclusion of special persons in his government.

“Since the creation of Ondo State in February 1976, Special Persons have not been opportune to hold any political office. As a result, you are the first Governor that will open the office of Special Assistant to the Governor on Special Persons

“The upward review of our annual subventions by 100%, another monumental gesture. Empowerment of some of our artisans with grinding machine, hairdriers, hair clippers , generators among others.

“I appreciate your supper and the sponsorship of 10 of our sport members during the National Sport Festival , it is as a result of this morale booster that they were able to win 5 medals in 2021. We also appreciate you for the 50% reduction in tuition and accommodation fess for special students in Adekunle Ajasin University, Akungba -Akoko which is regarded as first of its kind in Nigeria.

“We would equally like to appreciate her Excellency, our Mummy, Mrs. Betty Anyanwu-Akeredolu for her love, care and passion for our women through her FOWOSO program which has again touched the lives of some of our women.” Emmanuel said.

A plaque was presented to Governor Akeredolu by the Special Persons in recognition of his giant strides as the best Governor in the country.

Similar plaque was also presented to the Deputy Governor and the Chief of Staff to the Governor, Chief Gbenga Ale.