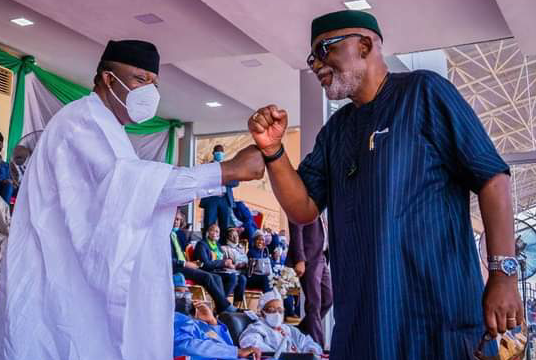 Ondo State Governor, Arakunrin Oluwarotimi Akeredolu,SAN, has thrown his weight behind the outcome of the meeting held by the leadership of the All Progressives Congress (APC) on Sunday, in Lagos.

This is just as the governor said lack of timeous communication aside mix up, were largely responsible for his inability to attend the meeting.

Akeredolu, in a statement issued by his Chief Press Secretary, Richard Olatunde, nonetheless, described the parley as ‘commendable and timely.

“Governor Akeredolu would have loved to be present at the meeting for several reasons. Far more important, the issues distilled bordered on the Southern Governors’ Asaba Declaration. However, a slight mix-up and communication gap had caused his unintended absence even as an earlier engagement had been fixed for Ibadan weeks before the meeting.

“Nonetheless, the resolutions reached by the revered leaders at the Lagos meeting are quite commendable and timely; the issues discussed are germane, and are clear indications that men of goodwill are working together to solve the Nation’s current challenges.

“As one of the leaders of the APC in the Southwest, and more so that, he presided over the Asaba meeting of the Southern Governors, nothing could be more spirit-lifting than the outcome of the Lagos meeting on Sunday. He, therefore, endorses all the resolutions reached by the leaders who attended the meeting “, the statement said.

Why I didn’t attend —Fayemi

Ekiti State Governor, Dr. Kayode Fayemi, has shed light on his absence at Saturday’s meeting of leaders of All Progressive Congress(APC) in Lagos.

The meeting, which Governors, Speaker, House of Representatives, Party leaders were invited was organized by Chief Bisi Akande, former interim chairman of APC.

Governors Fayemi and Rotimi Akeredolu of Ondo state did not attend the meeting.

In a statement in Ado Ekiti on Monday, Governor Fayemi said he wholeheartedly supports the stance of the APC Southwest leaders at the meeting that took place in Lagos on Sunday, May 23rd, 2021 despite his absence at the meeting.

The statement, signed by the Chief Press Secretary, Mr Yinka Oyebode stated that “Dr. Fayemi’s absence at the meeting was a result of a mix up in the invitation sent out for the meeting.

“For clarity, the invitation for the meeting which was said to have been sent via Whatsapp by Mr. Tunde Rahman, an aide to Asiwaju Bola Tinubu, never got to Governor Fayemi.

“The absence of an invitation for the Southwest APC leaders meeting prevented the Governor from attending the meeting, as he was not aware.

“Governor Fayemi, however, sent an apology to the meeting through former Ekiti State Governor and Minister of Industries, Trade and Investments, Otunba Niyi Adebayo; as he was already scheduled to attend another engagement at the time he came to learn of the meeting.

“Governor Fayemi, as a true democrat and Southwest leader, who is committed to the welfare of the people, is however in total support of the decisions reached by the Southwest leaders at the meeting, which include an endorsement of the positions earlier adopted by the Southern Governors’ Forum on the ban on open grazing and the need for true federalism, among others.”

Governors Fayemi and Akeredolu were in Lagos previous day, Saturday to attend the wedding ceremony of the son of the Chairman, APC, Ondo state, Mr Ade Adetimehin.