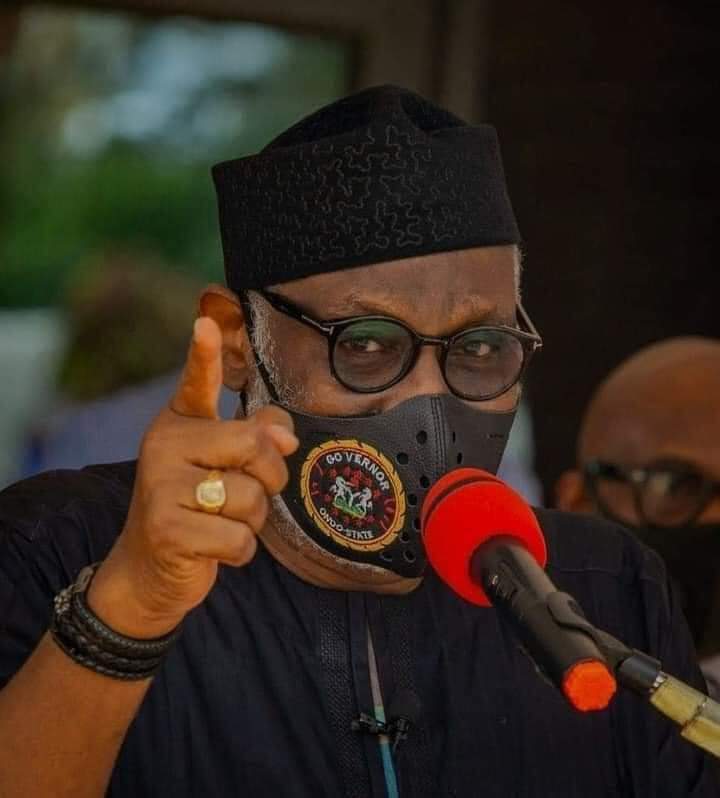 Secession: Yorubas too sophisticated to be led by Vagabonds —Akeredolu blasts Prof Akintoye

Governor Oluwarotimi Akeredolu has lambasted Prof Banji Akintoye for saying he has no right to speak for the people of Ondo State over the secession agenda of some elements under Oduduwa Republic.

In a Statement signed by Dr Doyin Odebowale, one of his Aides, Governor Akeredolu said “They claim that an agitation, which hopes to subvert the existing political order, is not “secession”.

“A group of stragglers, an admixture of the highly educated, not-so educated, outright louts and upgraded street urchins, declared “Sovereignty” of Yoruba Nation from Nigeria on behalf of themselves and members of the rapacious and indecorous band.”

Below is the full text of the statement.

GRANDSTANDING FOR RELEVANCE: A HISTORIAN’S BURDEN

We read a press statement issued by a hurriedly assembled platform for hustling, Ilana Omo Oodua, against the speech delivered by the Governor of Ondo State and the Chairman of the South West Governor’s Forum, Arakunrin Oluwarotimi Akeredolu, SAN, during the swearing-in ceremony of some members of the State Executive Council this week.

The tone of the riposte suggests that the writer(s) must be laboring with deliberate amnesia with regard to presentation of facts and twisting of same.

Responding to a statement such as this one should have been unnecessary but for the mention of the name of the self-styled Yoruba Leader, Prof Banji Akintoye.

The contents credited to the Professor are typical. His scholarship of the discipline tilts heavily towards rabid irredentism. He seems to have great difficulty in viewing everything beyond ethnicity.

While it is not our place to begrudge anyone for aspiring to lead the Yoruba people, arguably one of the most sophisticated on the surface of the planet Earth, it is curious to imagine that a group led by such a person will seek to lead an “agitation (which) shall be bloodless, Intellectually Rooted, Legally Grounded”(sic).

It becomes incumbent on these self-appointed “freedom fighters” to explain the meanings of these terms freely thrown at the gullible and ignorant.

They claim that an agitation, which hopes to subvert the existing political order, is not “secession”. A group of stragglers, an admixture of the highly educated, not-so educated, outright louts and upgraded street urchins, declared “Sovereignty” of Yoruba Nation from Nigeria on behalf of themselves and members of the rapacious and indecorous band.

It smacks of ignorance, of the crudest hue, to tell the world that a Professor of History concluded that an elected Governor of a State could not speak on behalf of those who have chosen him, overwhelmingly, to lead in the last two major elections in his State. if the Governor cannot speak for his people, is it a pack of unelected jokers who will declare “Sovereignty” on their behalf?

At what point did we decide as Yoruba people to declare a new Republic? Where was the referendum held? Who conducted it? Who chose the date for the declaration of “Autonomy for the Yoruba Nation”? If an elected Governor represents himself, on whose behalf are these people agitating? Who appointed Prof Akintoye as the leader of the Yoruba? How many people participated in the sham?

It is very saddening to note that some of those who pretend to be the custodians of the pristine philosophy of value propounded by the late sage, Chief Obafemi Awolowo, SAN, fail to see the connection between the Livestock Transformation Programme and the attempts by the current Administration in Ondo State to resuscitate the Akunnu and Auga Ranches.

Those who lack the capacity to look beyond the parochial prism of ethnicity and prebendalism cannot appreciate the genuine efforts of the Akeredolu’s Administration to make the people of the State the centre of all activities. The Governor’s speech was clear; no part of Ondo State will be ceded to any foreigner under whatever guise. Only a mischievous person will twist the fact.

Ondo State has been a major participant in the economy of the country. The people of the State will avail themselves of any benefits accruable therefrom. Pastoralism is not the exclusive preserve of an ethnic group. Anyone interested in the business will be encouraged by the Government.

Any non indigene who wishes to bring in cattle will be directed to the ranches. The cattle will feed in these facilities for a fee. The Ondo State Government will NOT permit any new settlement in any of these ranches and/or forests. No part of the land will be ceded to any group of private businessmen for habitation. This position is clear enough. Only the mischievous will attempt twisting the fact.

Prof Banji Akintoye was a Second Republic Senator before he travelled to the US for greener pasture. The 1979 Constitution was promulgated by the General Olusegun Obasanjo’s regime via Decree 102. The departing military inserted many provisions into the document without recourse to the members of the Constitution drafting Committee. He should inform those who believe in his “bloodless” fight for “autonomy” of his contributions. Anyone who strives, strenuously, to be ambidextrous at an advanced age should be suspected.

Prof Akintoye sure knows so much about ancient history. He should tell us of any transitional society whose constitution has been drafted, solely, by the people since the emergence of democracy as a political system.

He was in the US throughout the military era when patriots fought for the disengagement of the military. It is opportunistic and wicked, now at twilight, to attempt to drag the country into a state of anarchy to assuage vaunting narcissism.

Those who were in the country when Arakunrin Oluwarotimi Akeredolu, SAN, served as the President of the NBA could attest to the fact that this is not a person who plays to the gallery to please anyone. Any unbiased observer of events since he joined partisan politics will also agree that his involvement has been beneficial to the people of Ondo State.

The reference to non payment of workers’ salaries in Ondo State confirms petty-mindedness as the fulcrum of all grandstanding. Aketi has emerged victorious in two referenda conducted in Ondo State. Members of the opposition party still smarting from the crushing defeats at both periods must learn to live with the fact.

Let it be reiterated again. There will be no agitation for secession in any part of Ondo State. Prof Akintoye should submit himself to the people if he is so desirous of representing them. it is presumptuous, denigrating and condescendingly spiteful for a group of hustlers, living largely in anonymity but struggling for relevance, to keep proclaiming and legislating on issues which affect the destiny of a whole people, without the faintest suggestion of paying even scant regard to their feelings or extending due courtesy to the real representatives of the people whose opinions they discount as unimportant.

The people are discerning. They know the impostors. They have not forgotten the activities of the suborned agitators, the presumed penitent activists. The Ondo people, and indeed Yoruba are the easiest to lead but the most difficult to deceive. With them sophistry and demagoguery have their limits.